Watsu and Jahara: re-experiencing our time in the womb

I was very happy when one of my students, Oda, who attended my infertility course in Amsterdam recently , offered to give me a watsu.

I had never really had a formal watsu before. For those of you who are wondering what watsu is: it is sometimes known as shiatsu in water . It was pioneered in California by Harold Dull who applied some of the stretching principles he had learnt from studying Shiatsu in Japan to work in the water.

Oda works at the only specially built watsu pool in Amsterdam. It is situated inside a wonderful hotel: the Conservatorium.

Originally built as a bank in the 19th century, it was later used as the Music Conservatory.  It is in the museum area in Amsterdam. The spa and health centre are beautifully spacious and well designed.

As I floated in the quiet space, I remembered my other watsu type experience.  This was during a Residential in Switzerland, organised by Marlyse Schweizer, at Hotel Beau Site in Chemin Dessous, in the Alps, July 2007. Marlyse, I and a paediatrician, Pierre Deglon,  were jointly teaching about infant development and shiatsu. I wanted people to experience the feeling of the baby floating in the amniotic fluid and we all went to float  in pairs in the local thermal baths: Lavey les bains.

This has been part of my process of reconnecting with my time in the womb and supporting others to begin to do this. Even before our amniotic sac encloses us, supporting us in a watery environment around 4 weeks after fertilisation, we have been developing as cells in a fluid environment. Fluid is part of our nature. It always amazes me how the ancient Chinese knew this, saying that Kidneys and water are our foundation. They didn’t intellectually understand that fluid is a large part of the cells, or know its importance in the way we now to, in embryological development, but they felt it. We began in fluid and we retain our connection with fluid.  We all know that adults are made up of about 60% water. At birth, babies have more fluid, about 78%, which by one year drops to about 65%. It’s interesting that babies are more fluid (ie adaptable) than adults.

As I floated with Oda, I gave myself once more to the support of someone else’s body and allowed her to move my limbs and spine. It is a very gentle and deeply relaxing process. Unlike shiatsu on land, there is not so much focus on specific points and meridians with touch and pressure. It is more like a whole body movement and stretching.This is an important aspect of some styles of Zen shiatsu. Although, when needed, Oda will give pressure on specific points. Pregnant women love the weightless feeling of floating in water, especially in late pregnancy and Oda has experienced babies move in the womb, including babies shifting from breech positions. Sometimes mums to be are inspired by the relaxing nature of  watsu to give birth to their babies in water. Oda does birth preparation sessions in the pool.

The hour passed by quickly and afterwards I rested in the peaceful space of the spa, before cycling back to the Lloyd hotel and my Chelsea room, where I slept like a baby, refreshed for the next day of my fertility workshop.

Interestingly a few weeks later, while teaching in Zurich, I met a teacher of Jahara , Valerie Gaillard . I had never heard of this before, but it is another form of shiatsu in water. I visited the pool in the beautiful countryside outside Zurich where she was teaching. Apparently Jahara is more about focusing on the spine, and the neck, and less about stretching movements.

Whatever the specifics, these forms of shiatsu show the power of being held in a watery environment.  I often get my students to visualise floating in a pool of warm water, being held in whatever way they wish, allowing water to support them in whatever way feels appropriate. Some people are afraid of water, so it is important that they feel it is a form of water which they can accept: and of course if they don’t want to visualise this then it is important to never force this connection. The water could be warm or cooler, open or contained, for eg a lake or a pool or the sea,  they can be fully submerged or simply floating. How we relate to water is influenced by our experience in the womb, our movement out of water during birth, and our early experiences of water after we are born. Giving birth in water or bathing babies after birth can be amazingly powerful, but it is not always appropriate for everyone. Some women need to feel the earth to give birth and some babies after birth, also need to feel their mother’s body, the reassurance of her heart beat.

But there is no doubt that water is a powerful medium. It is our source. It is where we come from. 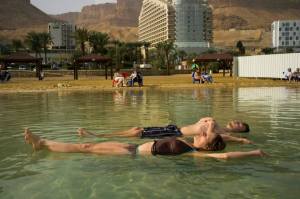 Floating in the Dead Sea

Oda has trained with some of the  best teachers of the water world such as Cameron West, Batia Sigal and Basia Szpak in The Netherlands, Belgium and Israel.

She is a watsu practitioner and has a special interest in pregnancy and birth.  She also is a foot reflexologist and has completed maternity training in this with Vera Krijn and Susanne Enzer.

Booking directly with Oda, enables you (pregnant or not) to get a great discount at Akasha Spa Amsterdam (110 euro it will cost 75 euro instead of 110  including using the spa facilities!)

The Akasha spa  London is open as well http://www.hotelcaferoyal.com/spa-and-gym/water-spa/, and has a beautiful watsu pool: By request, session with Oda there could be arranged.

Posted in What is shiatsu? and tagged infant shiatsu, shiatsu in water, water birth preparation with shiatsu, watsu